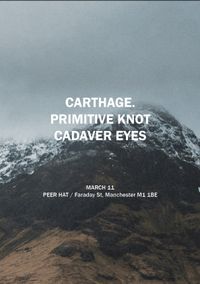 CARTHAGE AKA carthage is Damian B, one half of Khost, and who played in 16-17, Deathless, Gauge and Techno Animal. Sunburnt, distracted electronics, bleached and distressed vistas in which an occasional guitar appears in the distance.

PRIMITIVE KNOT - dark spirituality from Manchester who with their current release BRUTALISM, continue the innovative fusion of power electronics and DOOM industrial first heard on their previous release PURITAN.

Cadaver Eyes is a two man Tel Aviv-based unit of drums/voice and no-input-mixer, who for over a decade have been fusing psych, experimental music, noise and doom into intense songs played on uncontrollable instruments, tapping into a primal human layer of convulsions and contortions.